A Success Story form the rural Eastern Cape
A livestock project, supported by the Chris Hani District Municipality, has been running in communal areas of the Eastern Cape for several years. In 2013 Sibanye Gold added its support. Mngcunube Development has, since the start, implemented this project (and others like it across the province). This story proves that rural development can pay off! 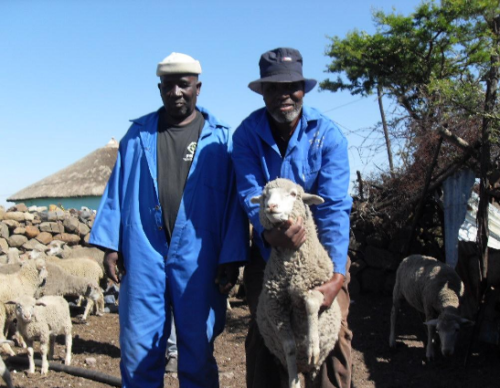 In the photograph below Mr Wayitile Tshawuzana of the Chamama Forest Village in the Intsika Yethu Local Municipality, holding one of his lambs along side his VLP Lucas Ngqaneka. A VLP is a local farmer who is trained to take over the services of the current project from Mngcunube Development. Mr Tshawuzana has never missed bringing his livestock to the monthly visit of his village since he joined the programme two years ago. This photograph was taken in September 2013, during the height of the recent drought. He has not spent any money on supplementary feed but has rather depended upon maintaining animal health. This has paid off handsomely as he has come out of this difficult period with all his 27 ewes alive and an extra 24 lambs that are now at weaning stage. This is approximately a 90% weaning rate which is quite outstanding for communal conditions – many commercial farmers would also agree if they did not have the benefits of pastures and supplementary feeding.

In the picture below one can see that his lambs are almost the same size as the ewes. In livestock farming there is a rule of thumb: ‘Look after your ewes and your ewes will take care of the lambs’. It is clear that Mr Tshawuzana has grasped this concept!

There has been independent research of the livestock support process carried out in this and other projects by Mngcunube Development. It has proved that the cost to benefit ratio is astoundingly good – so much so that people struggle to believe it. To illustrate the point consider the situation of Mr Tshawuzana. Over two years he has spent about R 1500 on having his sheep treated for basic animal health. In just one year his lambs are worth about R 24 000. There is no reason why that cannot repeat itself every year! Before the project he would have had close to 100% death rates among his lambs due to diseases and poor health and nutrition. His story speaks for itself. There are many thousand like him in rural areas – not all quite so diligent perhaps – but all reaping huge gains from using the project approach.